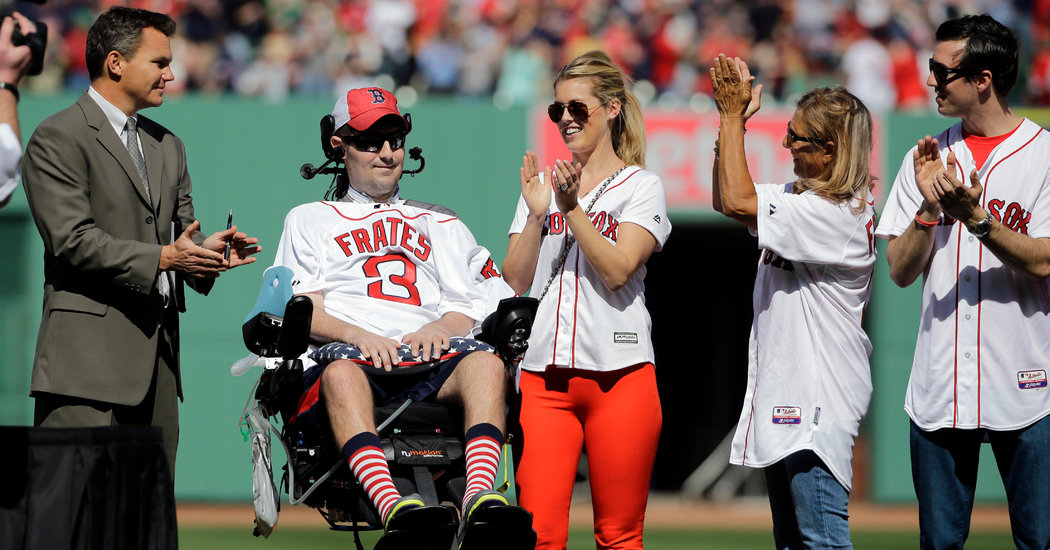 Pete Frates, a former college baseball player whose participation in the social media phenomenon known as the Ice Bucket Challenge helped raise more than $100 million toward fighting amyotrophic lateral sclerosis, commonly known as A.L.S. or Lou Gehrig’s disease, died on Monday at his home in Beverly, Mass. He was 34.

His death was announced in a statement by Boston College, his alma mater. Quoting his family, it said he died “after a heroic battle with A.L.S.”

Mr. Frates learned he had the disease in 2012. A.L.S. attacks the body’s nerve cells and leads to full paralysis. Patients are typically expected to live for two to five years from the time of diagnosis.

Mr. Frates did not create the Ice Bucket Challenge, in which participants dumped buckets of ice water over their heads while pledging to donate money to fight A.L.S. But a Facebook video in July 2014 showing him doing his version of the challenge — in which he bobbed his head to Vanilla Ice’s song “Ice Ice Baby” — prompted a surge in participation that summer, to where it became a viral sensation.

LeBron James, Bill Gates, Oprah Winfrey and other celebrities stepped forward to be drenched, and millions of others followed suit. Mr. Frates became one of the most visible supporters of the effort, and in August 2014 he completed the challenge again (this time with ice water) at Fenway Park, along with members of the Boston Red Sox organization. The videos were inescapable for anyone on Facebook, and the A.L.S. Association, a Washington-based nonprofit that works to fight the disease, received more than $115 million.

In 2015 the organization released an infographic showing how those funds were being spent. About $77 million, or 67 percent, of the money was used for research that ultimately identified the NEK1 gene, which contributes to the disease. The finding gave scientists guidance in developing treatment drugs.

Peter Frates was born on Dec. 28, 1984, in Beverly, a small city about 25 miles north of Boston, to Nancy and John Frates. A gifted athlete and student, he played football, hockey and baseball at St. John’s Preparatory School in nearby Danvers, Mass. He then attended Boston College, where he played baseball. He was chosen team captain in his senior year.

Mr. Frates met Julie Kowalik, a Boston College senior, in the summer of 2011, and the two married in June 2013, more than a year after Mr. Frates learned he had A.L.S. Their daughter, Lucy Fitzgerald Frates, was born in August 2014. In a 2012 profile of the couple on the website boston.com, Julie Frates was quoted as joking that they had already learned how to love each other in sickness. “We’ve got that one nailed,” she said.

Mr. Frates learned about the Ice Bucket Challenge in July 2014 from a friend, Pat Quinn, who also had A.L.S. He posted a video of himself doing the challenge on Facebook that month. Tagging his friends as well as professional athletes and “The Howard Stern Show,” Mr. Frates explained in clear terms what the challenge consisted of: “You have 24 hours to dump a bucket of ice over your heads!!”

Soon, millions of people were being alerted that they, too, had to meet that deadline.

After the Ice Bucket Challenge had run its course, Mr. Frates and his family continued to raise awareness of A.L.S. In 2017, the family revealed the cost of their medical bills — about $70,000 to $95,000 a month — to underscore the difficulties of caring for A.L.S. patients.

Mr. Frates retained his playful sense of humor even as he lost the ability to speak or use his limbs. Hours after false rumors of his death made their way onto social media in 2017, he released a video on Twitter. The clip featured him moving his eyes and eyebrows to the tune of the Pearl Jam song “Alive,” which includes the lyrics “I, oh, I’m still alive.”

He is survived by his parents, his wife and his daughter as well as a brother, Andrew, and a sister, Jennifer Mayo.

“Remarkably, Pete never complained about his illness,” his family said in their statement. “Instead, he saw it as an opportunity to give hope to other patients and their families. In his lifetime, he was determined to change the trajectory of a disease that had no treatment or cure.”