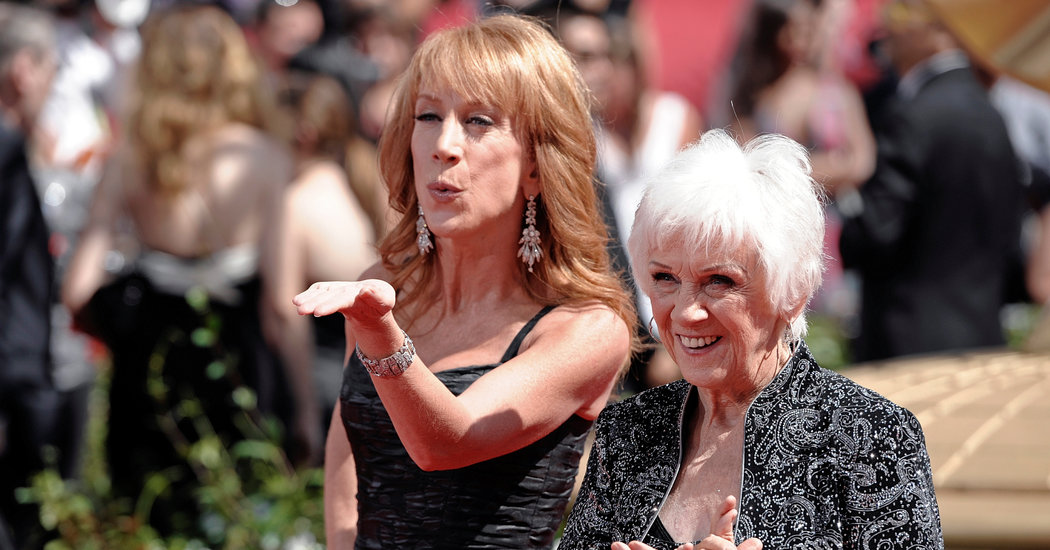 Maggie Griffin, who was a beloved co-star of her daughter Kathy Griffin’s Emmy-winning reality show, “My Life on the D-List,” died on Tuesday. She was 99.

Kathy Griffin announced the death on Twitter and Instagram, giving no other details. In 2019 she said that her mother had dementia.

On “My Life on the D-List,” which aired on Bravo from 2005 to 2010, Maggie Griffin was a churchgoing, wine-loving, elfin woman who adored the conservative Fox News commentator Sean Hannity. Her daughter, on the other hand, is a brash, liberal comedian given to profanity.

The show, self-aware and sometimes self-deprecating, was built around Kathy’s attempts to build fame. Maggie was sometimes the butt of her daughter’s jokes, both on the show and in Kathy’s standup comedy, sent up as a gruff, muumuu-wearing throwback.

She was also thrust into situations on camera that might have made her uncomfortable. In one episode, as the two were exploring East Hollywood, Kathy casually handed a print shop employee a partly naked publicity photo of herself to hang on his wall alongside those of other celebrities.

“Oh, my God!” Maggie exclaimed upon seeing the picture.

There were times when being a part of her daughter’s act irked her.

“As you all may know, she loves saying things on television she knows I don’t want to talk about,” Ms. Griffin wrote in “Tip It! The World According to Maggie” (2010), a memoir named after a technique for getting the last drops out of a box of wine. “Certain things she does to provoke me, I could kill her for. And all that foul language!” But, she added: “I do the best I can. I go along with it.”

Ms. Griffin also appeared with her daughter on her late-night talk show, “Kathy,” which aired for two seasons on Bravo. They were interviewed together by Anderson Cooper, Ms. Griffin’s longtime partner for New Year’s Eve broadcasts on CNN, and were guests on shows like “Jimmy Kimmel Live!”

Kathy Griffin often joked that she felt her mother’s fame was overshadowing hers, but after her mother died she thanked the legion of fans that Maggie had attracted.

“I’m so grateful you guys got to be part of her life,” she wrote on Twitter. “You knew her. You loved her. She knew it.”

Margaret Mary Corbally was born on June 10, 1920, in Chicago, the youngest of 16 children of Agnes and Michael Corbally, Irish immigrants who ran a grocery store. She went to Catholic school in Chicago and in 1942 married John Griffin, who managed an electronics store and later acted in commercials. She worked part time as a hospital administrator while caring for their children.

Mr. Griffin died in 2007. In addition to her daughter, she is survived by a son, John; a sister, Irene Bidinger; and two grandchildren.

Ms. Griffin wrote in her memoir that she thought audiences appreciated her because “I’m a regular mom.”

“I’m not a mother who pampers Kathy and caters to her,” she continued. “I love my daughter, and I’m immensely supportive of her, but, hey, I tell her off.”